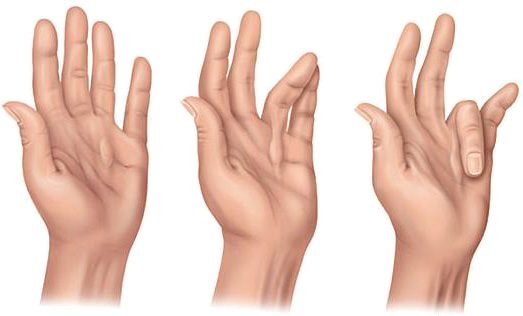 Dupuytren’s disease, also known as Dupuytren’s contracture, refers to a chronic disorder that affects the tissues of the palm of the hand. If left untreated, the patient will notice how thick tissue forms under the skin of the hand, and how over time their fingers may contract into the palm and lose mobility.

The first doctor to describe the disease and its possible treatment was Guillaume Dupuytren in the early 19th century, hence the name of the disease. Since then, medicine has evolved a lot, and today there are various treatments for the different stages of Dupuytren’s disease.

Dupuytren’s disease affects about 5% of the population. The causes of this disease are not entirely clear, but it has been found to occur more often in people with a family history of the disease, as well as in patients with diabetes or epilepsy, and alcohol or tobacco use is considered a risk factor.

Treatment for Dupuytren’s contracture will depend on the state of the disease. Dr. Martinez Gutierrez will meet with you to discuss your case and determine the most appropriate treatment for you.

Generally speaking, we can say that in early stages less invasive options are used. When the contracture is mild, tissue begins to thicken or strings form, radiation therapy to slow the development of the contracture, needle aponeurotomy to loosen the tendons, or collagenase infiltration to kill the strings may be performed.

In advanced cases, hand surgery is an option that can help correct contracture and restore much of the mobility of the fingers. The procedure involves the removal of tissue to free the joints so that the patient can freely reopen and close the hand.